Professional Footballers make freekicks look so much easier than what they actually are. Taking freekicks can be considered an art in football because it takes a stroke of masterclass to really put the ball when you are focusing on putting it.

Freekicks are created from the intent of making a tackle without collecting the ball. Here Kristian Brymora will explain the different factors, techniques, deliveries and much more which can be added to diversify your freekick deliver.

Factors to Consider when Delivering a Freekick

Freekicks are a calculated prediction which is all dependent on the placement of a number of factors. These includes:

These are all factors which are taken into consideration before the attempt is taken. These are the split decisions which may differentiate a game from being won or lost. Different positions of the ball on the field are to be considered for the way which the freekick is delivered.

The image below provides a representation of different sectors where free kicks can one taken from in the attacking third. There are always different approaches as to how each player delivers their freekicks, but these are thoughts and opinions of Kristian Brymora who believes that these techniques are most effective when perfected. 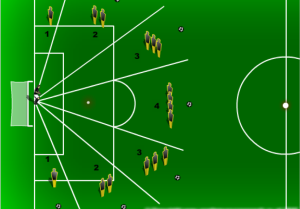 Zone 1– is a delivery from wide areas. These areas are difficult to create an angle to get a good approach on goal.  In the circumstances of a ball being delivered from these areas, aim for the delivery of the ball to beat the first defender by floating the ball towards the back post for people to people to attack.

Zone 2– The main approach which should be taken when delivering a freekick from zone 2 is directing it towards goal. The flight of the ball should be towards goal for a number of reasons:

With the right delivery, the ball has the potential to do anything you want it too.

Zone 3– is what Kristian considers using a ‘whip’ technique. Zone 3 is a great area to analyse the wall and goalkeeper, and to pick out a place to aim for. The ball should be approached from an angle allowing your strike to curl around the wall and away from the goalkeeper.

In the image above, you can see the run of Messi taking an angled approach allowing him to strike the ball with purpose either over the wall or towards the far post.

Zone 4– is all about power over placement. Taking a freekick from a central position can pose its difficulties. The reason for this is because the wall is situated to block on side of the goal while the goal keeper defends the other side. 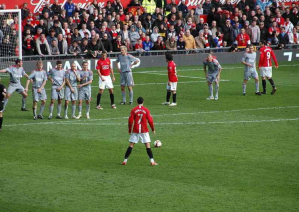 In the image above, it shows the approach which Ronaldo takes when taking a freekick from a central position.The run top approach allows him to generate more power from the angle of which he strikes the ball.

Every freekick taker has their own particular style which works better for them than others. Let’s take the hot topic of the two best players in the world at the moment; Messi and Ronaldo. We could write all the statistics and argue over who is better, but we will save that for another time.

Messi and Ronaldo are renowned for their ability to score magnificent goals from freekicks with very different techniques. Messi’s approach is almost 100% of the time about placement over power. With his precision he always magically gets the ball up and over the wall and past the keeper. That’s why he has the nickname ‘The Magician’.

Then there is Ronaldo who has a rocket free kick. The speed at which he strikes a ball has been recorded at speeds of 130km/hr. With all honesty, nobody is going to have a great chance of sopping his shot from going in.

So, power or placement? That is completely up to the positioning of where the ball is in relation to the goal, and the technique which is used when striking the ball. Kristian Brymora likes to try and diversify his techniques and use both, as it provides greater flexibility when the opportunity arrises.

Freekicks are a very difficult technique and skill to master. It takes hours upon hours of practice and consistency. In the coming months OnTheBall will begin to produce tutorials and videos as to how to strike a freekick, the positioning of the ball, and more on how to beat the keeper.

Kristian Brymora is a professional football player who has played at the highest level playing for the Newcastle Jets in the Hyundai A-League, Millwall Lions FC in the Championship, Hassleholm IF in Sweden and Green Gull SC in the Victorian National Premier League. The goal of his blog is to deliver a platform where anyone and everyone can learn more about the world of football from the inside. To read more about Kristian Brymora, be sure to head across to the about page, or to get in contact head to contact us. View more posts

This site uses Akismet to reduce spam. Learn how your comment data is processed.